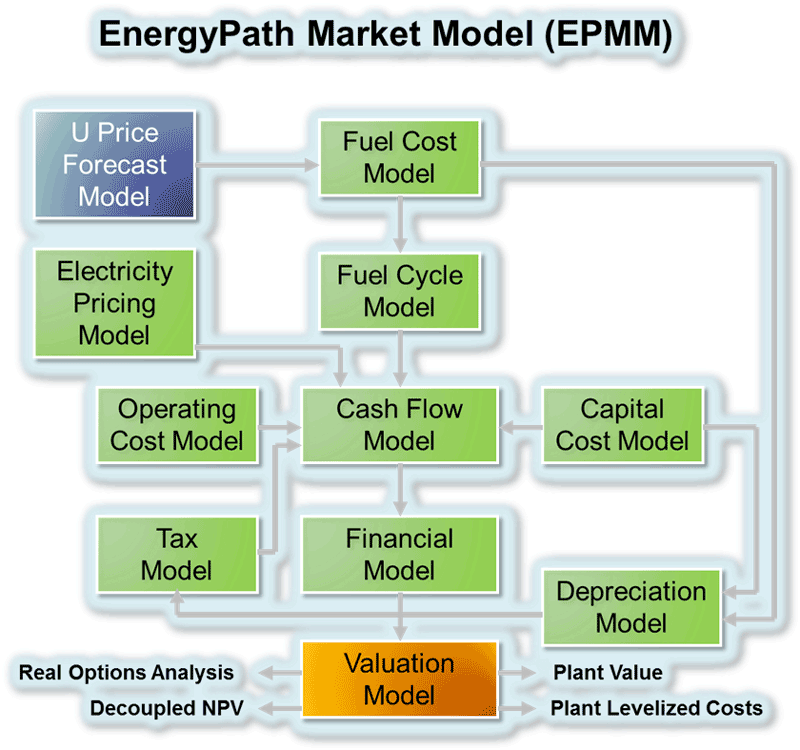 A more detailed description of EPMM is shown in Figure A-2 below, characterized for a nuclear plant.  For clients in countries introducing new generation technologies, Figure A-2 shows the degree of control clients have over the valuation of a nuclear plant. Other versions of EPMM are used for non-nuclear applications. For instance the fuel cost model would be eliminated for a renewable asset. And a natural gas plant possesses a fuel cost model which uses different stochastic processes for forecasting the price of natural gas (e.g., Geometric Brownian Motion or Mean Reversion). 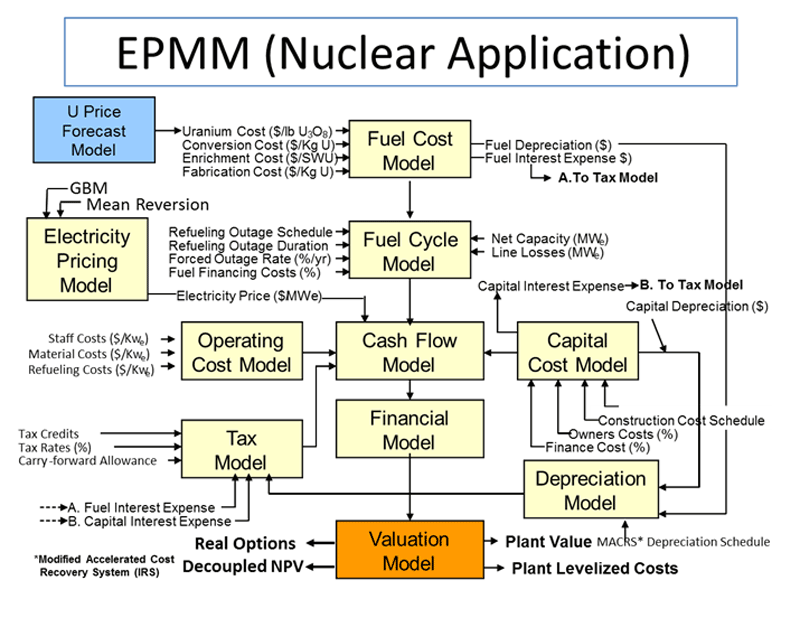 The heart of EPMM is the cash flow model which calculates the operating cash flow including tax accounting which permits sophisticated tax treatments such as tax carry-forwards. The tax model actually used would reflect the tax regime for the client’s country (including allowable depreciation). In the US the Modified Accelerated Cost Recovery System (MACRS) is used.

The fuel cost model calculates the fuel cost component of cash flow recognizing that fuel costs are capitalized and then depreciated. EPMM assumes that the first core is capitalized with the plant construction costs.

The operating cost model also includes annual capital improvements which are capitalized according to the tax rules in effect. Finally the financial model employs the cash flows to determine the value and levelized cost of electricity (LCOE) of the plant.

In addition to the plant value calculated with free cash flows, the model is also capable of determining the static value of the plant as the input to a real options analysis (ROA) using the binomial method. ROA recognizes the flexibility inherent in nuclear plant construction and can lead to different business decisions than a valuation based upon free cash flow might offer. Nuclear plant construction patterns can be altered depending on the receipt of additional information about the future value of electricity, environmental policy affecting fossil fuels and the price of alternative fuels which establish electricity prices on the margin. The ability to change construction schedules (and even abandon, delay or change scale of the plant) provides additional value to the nuclear plant (i.e., option value).

EnergyPath is also pioneering within the energy markets a new and promising valuation methodology known as Decoupled NPV (DNPV). This methodology eliminates the value distortions caused by combining the time value of money and a risk premium to form a risk adjusted discount rate (RADR). Instead of the use of a risk adjusted discount rate DNPV subtracts from cash flows a synthetic insurance premium to create riskless cash flow streams, thus allowing the discount rate to be the risk free rate. One of the reasons this is important for nuclear plants is that the future is discounted less heavily taking advantage of nuclear’s long operational lifetimes.